The Right Fit: Stand-Alones and Small Systems Must Get the Questions Right

When the U.S. Supreme Court upheld the Affordable Care Act (ACA) in June 2012, leaders across the health care industry saw that reform not only was here to stay, but it would be accompanied by a momentous shift away from payment for discrete episodes of care (fee-for-service) toward full management of a population’s lifelong health (global payment).

The change in payment philosophy will fundamentally change the structure of the U.S. health care system. It will move the hospital out of the center of the health care universe and demand collaboration across the continuum and the ability to serve and manage a critical mass of people.

For those who have been in the health care industry since the merger-and-acquisition boom of the early 1990s, the scenario may seem familiar. According to Irvin Levin & Associates, there were 94 hospital merger-and-acquisition deals in 2012, more than the industry has seen in a decade. It seems that not a week goes by without another article in the press on hospital mergers.

As in the ’90s, stand-alone nonprofit hospitals and smaller systems now are merging, joining existing larger systems or seeking partners to meet the demands of a changing market. Specific objectives of such partnerships often include: to achieve economies of scale; to build the primary care, IT, and contracting infrastructures to manage population health; to develop clinical best practices that result in better outcomes at a lower cost; to offer a geographically distributed, comprehensive, integrated continuum to create a network attractive to payers developing accountable care organizations (ACOs) or to become ACOs themselves; and/or to partner with a health plan or attain an insurance license to offer their own health plan.

Our experience is that the benefits outlined above — often the ostensible reasons for affiliation — can be achieved via a carefully
constructed network without the hospital’s ceding full autonomy. However, underpinning many partnerships is the need to increase access
to capital. The only ways to do so are to:

Of the three options, No. 1 and No. 2 maintain autonomy. However, counting on major philanthropic gifts to ensure independence is often unrealistic, and strengthening the balance sheet during challenging financial times may take a decade. Option No. 3 compromises an organization’s autonomy. Hence, many hospitals and small systems are reluctant to consider it proactively.

Compounding an already difficult decision about whether to stay independent, the concerns of independent Catholic hospitals and smaller health systems extend beyond the strategic and business considerations of their fellow not-for-profit organizations. For Catholic health sponsors and leaders, two key questions emerge:

This article explores the strategic and business considerations of various types of affiliation, with particular emphasis on the unique considerations for Catholic health ministries.

Don’t Skip The ‘Why’

First, leaders at any organization should ask themselves why they might seek a partnership or merger. Partnerships or mergers are not ends in themselves; they are means to an end. Being able to articulate clearly what your organization is trying to achieve over the next five years — and whether and how a partnership could help you achieve that end — is a critical first step. Unfortunately, it is a step too often skipped as the discussion prematurely focuses on legal structures, organizational charts and lists of reserved powers.

As basic as it sounds, it is helpful for the board and senior leaders to answer three key questions before even considering a potential partnership:

The most successful partnerships flow from already established strategy. As a recent report from the international management consulting firm Booz & Company states:

“In a[n …] analysis of more than 200 deals among hospitals and health systems between 1994 and 2011, we discovered that more than half of them did not result in higher performance — and 18 percent actually sank as their margins turned negative. The greatest returns came from deals in which hospitals pursued a consistent approach to acquisitions that was tightly aligned with the strategic need for capabilities or scale. These deals helped hospitals create more attractive networks for employers, achieve the right scale to support a specialized hub, or create a more integrated continuum of care. In short, the intent of a deal is essential to its ability to create value.” [Emphasis added.]

Creating a clinically integrated network or a network of hospitals, physicians and other continuum providers that will be capable of assuming and managing population health risk is one of the areas of greatest interest for hospitals of all sizes. Most realize it would be impractical and unaffordable as a solo institution to build the infrastructure needed to become an effective ACO or to manage risk payments. A Jan. 23, 2013, Wall Street Journal article on ACOs quotes Tom Scully, former Centers for Medicare and Medicaid Services administrator, who said: “The start-up cost of a real ACO is probably $30 million and up in a midsize market — and doctors
don’t have that capital. So hospitals are pitching that they will be ACOs, and buying up practices.”3

One such partnership is MissionPoint Health Partners of Nashville, Tenn., a nonprofit, clinically integrated network started in January 2012 by Saint Thomas Health, part of Ascension Health. The network’s stated goal is to “provide quality, patient-focused care while also reducing overall healthcare costs and rewarding providers for delivering the highest quality of care” as an ACO.4 In July 2012, it became a member of Medicare’s Shared Savings Program. In just over a year of operation, the network has grown to 1,500 physicians; membership has increased from 10,000 to 50,000; and MissionPoint saved 12 percent in cost on its first 15,000 members. In addition, MissionPoint has signed an agreement with Blue Cross Blue Shield of Tennessee and has had another smaller system, Capella Healthcare of Franklin, Tenn., join the network to share quality data and integrate with MissionPoint’s IT infrastructure.

In this example, as in many successful partnerships, network formation is a means to a specific strategic end, not a strategy in itself. Network participants cede some control to the network to obtain the benefits, but they do not give up overall autonomy, nor do they attempt full merger.

Many view partnership as an either/or choice — either we remain independent or we merge — though that’s not exactly the case. There are ways to affiliate in not-for-profit health care today, especially for stronger hospitals and small systems, which still allow different degrees of independence. 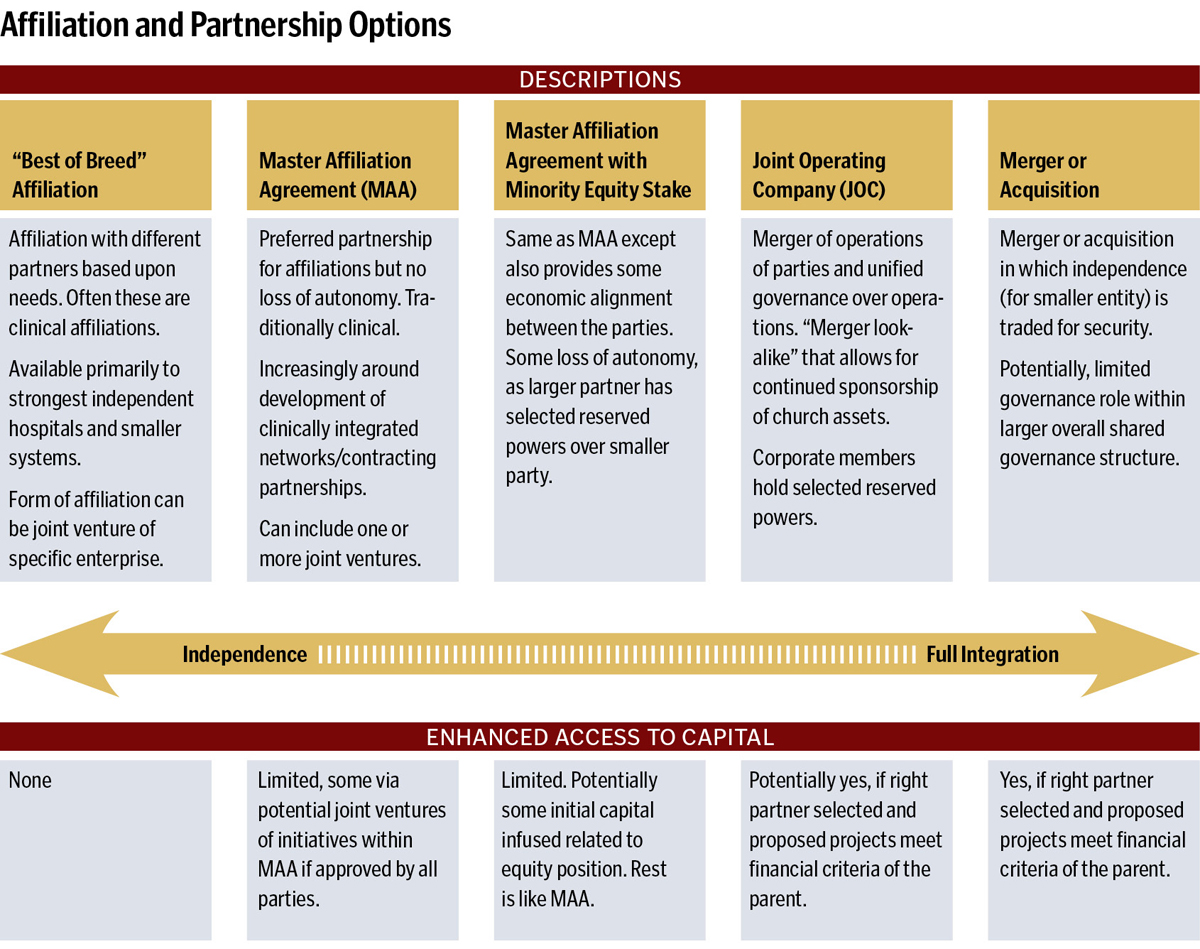 Make no mistake, however: if access to capital is a primary objective, you must look at the fully integrated partnership models. In a 2012 white paper, the Governance Institute described the trade-off between independence and becoming a member of an integrated health system in this way:

“With the integrated system approach, all local sub-systems operate from a unified and common strategic plan, clinical model, financing structure, and physician/provider services method. With this approach, it is not reasonable to permit unrestricted ‘local autonomy.’ Local boards may remain in place, but localized, decision-making freedoms are exchanged for a unified brand and consistency of clinical care programming, clinical quality, patient safety standards, and third-party contracting methods and strategies.” [Emphasis added.]

For Catholic hospitals and smaller systems, there are unique considerations that must be incorporated into any decision about remaining independent. The following questions may be difficult to pose, but it is crucial to reflect upon them sooner rather than later:

Just as with any major decisions that have long-term implications, there are major risks related to partnership. These risks fall into four broad categories:

Ultimately, an independent Catholic organization’s decision whether to merge or form another sort of partnership should flow from the organization’s vision, strategic plan and financial capability to invest as needed to transform delivery as required by health reform. Moreover, any organization — especially those with the unique and important Catholic heritage and commitments — must take into account a potential partner’s history, culture and mission to determine whether these will facilitate a successful partnership.

Finally, independent organizations wishing to partner must recognize that stronger, more durable forms of alignment, though potentially advantageous in the long run, will result in at least some loss of autonomy in decision-making. Careful consideration of these factors will help your organization make the difficult decision whether and when to partner in our challenging and changing health care environment.

MARIAN C. JENNINGS is founder and president of M. Jennings Consulting, a health care management consulting firm based in Malvern, Pa. She has worked for three decades with Catholic hospitals and systems across the country and was very involved as a facilitator in The New Covenant collaboration efforts in the 1990s, which were sponsored in part by the Catholic Health Association.

Is It Realistic to Think You Can Remain Independent?

In today’s rapidly changing, even hostile environment, it is important that a hospital or smaller system have a realistic view of its ability to remain independent over the next five years.

From our experience, hospitals and smaller systems with the greatest likelihood of sustaining themselves as vital, independent hospitals or systems demonstrate most or all of the following characteristics (in priority order). If your organization does not demonstrate most of these characteristics today, time is of the essence in considering options. Even the strongest Catholic health systems do not have the financial wherewithal to absorb every financially distressed Catholic hospital seeking a partner.1